BY NICKY WOOLF
THE GUARDIAN

A team of Chinese scientists will be the first in the world to apply the revolutionary gene-editing technique known as Crispr on human subjects.

Led by Lu You, an oncologist at Sichuan University’s West China hospital in Chengdu, China, the team plan to start testing cells modified with Crispr on patients with lung cancer in August, according to the journal Nature.

Crispr is a game-changer in bioscience; a groundbreaking technique which can find, cut out and replace specific parts of DNA using a specially programmed enzyme named Cas9. Its ramifications are next to endless, from changing the color of mouse fur to designing malaria-free mosquitoes and pest-resistant crops to correcting a wide swath of genetic diseases like sickle-cell anaemia in humans.

The concept of editing human DNA has often been controversial. In the UK, genetic modification in humans remains off-limits.

A study on non-viable human embryos, also conducted in China, was called off after researchers found what they described as “serious obstacles” to using the method in a clinical setting.

And in March 2015 a group of researchers published an open letter in Nature saying that there were “grave concerns” about the ethical and safety implications of editing the “germ-line” in human genes – the genetic code which is passed on. 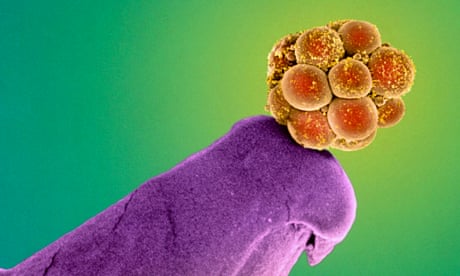 Crispr: is it a good idea to ‘upgrade’ our DNA?

The Sichuan University trial, it is important to note, does not edit the germ-line; its effects will not be hereditary.

What the researchers plan to do is enroll patients with metastatic non-small cell lung cancer, Nature reported, and for whom other treatment options – including chemotherapy and radiotherapy – have failed.

China has been at the forefront of Crispr research. In 2014, researchers at Nanjing University reported that they had successfully engineered mutations in macaques – the first reported successful use of the technique in non-human primates.

Crispr was approved for human trials in the US by a research group backed by tech billionaire Sean Parker, but if it begins on schedule in August the Sichuan University study will beat them to the punch of being the first of its kind.

BY IAN SAMPLE THE GUARDIAN Doctors have told health services to prepare for a new era of cancer screening after a study found a simple blood test could spot multiple cancer types in patients before they develop clear symptoms. The Pathfinder study offered the blood test to more than 6,600 adults aged 50 and over, and detected dozens of new cases of disease. Many cancers were at an early stage and nearly three-quarters were forms not routinely screened for.

BY ANNALEE ARMSTRONG FIERCE BIOTECH A CRISPR-Cas9 gene editing technology that has shown promise in clearing HIV from mice is headed into human testing. Excision BioTherapeutics will usher the CRISPR-based therapy EBT-101 into clinical trials after the FDA cleared an investigational new drug application, according to the company’s press release.